I mentioned in my post about 24 that we've ditched the DVR.  Any time I mention this to people in conversation, I get the immediate, "WHAT!  You were the first person I knew to get the DVR!  How could you get rid of it?"  So I figured I should provide my response here too, with a little background as well.

I was quite possibly the first consumer in Cincinnati to get a Time Warner DVR.  I read about TW offering the DVR service in other cities/states, like NY, in October 2002.  I later learned that they were rolling it out city by city, and I started hounding them to tell me when it would be available in Cincinnati.

For the first few months I was calling them (usually once a week), they had no idea what I was talking about.  I explained it to them a few times and some of the representatives didn't even believe me.  But eventually, they had a release date for me.

When the release date arrived (April 14, 2003), I got to the service store before it opened and I was the first person through the door.  Most people called and scheduled to have the DVR installed, and they had weeks-long waiting lists.  But I had mine hooked up at 10:30am the first day it was available.  I relied on the DVR for years thereafter.

More than 1,200 Time Warner customers agree. That many subscribers have put their names on a waiting list after seeing promotional spots on Time Warner, the Tristate's largest cable system.

In our continual effort to trim our budget, my wife and I decided to ditch digital cable and the DVR last year.  She felt she was watching too much TV because there was so much available to her.  And the only show I seek out to watch is 24.  Sure, I casually surf the channels on occasion and watch the morning news while I'm getting dressed, but 24 is the only show that I must watch.  We had talked about doing this several times before, but we just couldn't pull the trigger.  We finally did though.

We went from having 200 or so channels to having around 25 channels.  We get the local channels plus PBS.  Luckily, we get E! which is a nice crutch.  E! is channel 25, and we're only supposed to get channels 2-24.  The service guy told us that sometimes channel 25 continues to come through, and for us, it does.  We also get channels 96-99, but with bad reception--and I don't even know what channels they are.  We switched in August, and I think the only thing missed is Project Runway—my wife really liked that one.

On the cost side, we were previously paying $70/month for digital cable with the DVR.  We did not have any premium channels and we didn't feel like we watched $70 worth of TV each month.  We now pay $10 per month for cable and we're very satisfied with the cost to usage ratio. 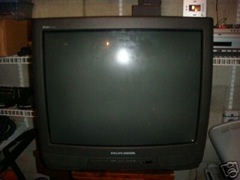 I plan to run a coax line to my desk so that I can use Vista to record 24.  Then I'll burn it to DVD and watch it on my mammoth 10-year-old TV--all 27" of it.  Not running coax to my desk was likely my biggest oversight when I wired the basement.  I have coax on the other side of the room, but I didn't think about feeding it into a PC.

Another note with the reduced television... Having kids, we've really tried to limit their TV time.  My older son has always had a couple of PBS shows that we let him watch from time to time, and my younger is yet to be interested in TV at all (although he likes playing with and chewing on the remote).  We hope that with the boys starting life out with very limited television, they won't rely on it for their sole source of entertainment and leisure later in life.  But we'll see how that goes.