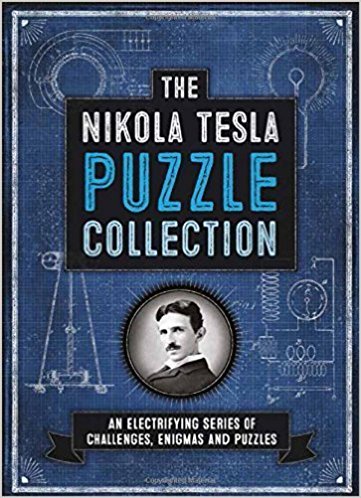 I also enjoy learning about Nikola Tesla. I’ve watched many documentaries and I’ve read a lot about him. When I saw “The Nikola Tesla Puzzle Collection,” I thought for sure it would be a lot of fun. It is labeled as “an electrifying series of challenges, enigmas and puzzles.” Perhaps the omission of the Oxford comma should have tipped me off that I would be disappointed.

The Nikola Tesla Puzzle Collection fails to provide enjoyment. There are a few reasons for this that I wanted to share to potentially save others from the frustrations I experienced.

There are riddles scattered through the book, each of them posing as an anecdote about Tesla. They are clearly not authentic tales about Tesla–instead they are just poor attempts at tying the book to Tesla. There indeed are a few nuggets about Tesla in the book, especially near the beginning, but none even remotely noteworthy.

In fact, this book really has nothing to do with Tesla. Putting Tesla’s name and picture on the cover was a cheap (yet effective) ploy to sell more copies. Do not be fooled–this is not a Tesla-themed puzzle book.

If the riddles were good, I might excuse the blatant Tesla rip-off. But they’re not–most of the riddles are terrible and I reached the point of not even attempting them by the halfway point. The “Imposter” riddle was the one that made me conclude that the riddles were not worth my time.

Agent Hardy had been sent on a mission to rescue the particle physicist Doctor Jefferson who claimed to have perfected Tesla’s “Deathray.”

When she arrived at his lab, she was alarmed to find not one but two identical Doctor Jeffersons.

The quick thinking agent covered both men with her gun and found two syringes in a drawer.

“I’m taking you both back with me,” she said, “but I want a sample of your blood for analysis, right now.”

The “Jefferson” on her left took a syringe and nervously rolled up his sleeve. The one to her right shook his head and backed away.

Agent Hardy’s gun barked, wounding the left-hand Jefferson in the leg before he even applied the syringe.

Can you explain her actions?

I thought about this for a while and knew the answer clearly had to do with the syringe. After failing to find the precise answer to the riddle, I referenced the solution in the back of the book.

Hardy had done her homework and discovered that Doctor Jefferson had a pathological fear of needles.

Um, okay. She just happened to “do her homework” before going to pick him up. She is an agent, so I guess I could buy that. But if a particle physicist had a pathological fear of needles, then why did he happen to have 2 synringes in a drawer? And how would she just happen to find them while covering both men with her gun? Ugh. Whatever.

This isn’t even the worst riddle.

With the tales of Tesla being unauthentic and the riddles being weak, that left only the puzzles as the remaining hope for this book. But there are so many errors in the puzzles that all possible fun was stolen from them too.

There are 68 puzzles in the book. And 7 of them have errors that make them either impossible to solve or to have multiple possible solutions. That’s right, 7 of 68 puzzles were wrong. At a 10% error rate, I could not trust any of the puzzles to be correct. In fact, after the first error, I doubted every single puzzle. When I was stuck, I never knew if it was because I was truly stuck and had not figured it out yet, or if the puzzle had an error making it impossible to solve. This negated all the fun that puzzles offer.

Here are the puzzles I found to be in error:

Why Finish the Book

With so many frustrations, I was tempted to just pitch the book halfway through. I decided to finish it for 2 reasons. First, I became intrigued by the error rate of the puzzles–I wanted to count up the puzzles and errors. Second, I decided the errors were so bad, it would be cathartic to write a review of the book and perhaps help even just one person avoid the irritation the book provides.