Every once in awhile, I find a product that does not please the senses.  One of my best examples was when my wife bought some Folgers Jakada when it came out.  I'm hooked on Starbucks Frappuccinos and the Folgers alternative was much cheaper.  Well, as I took my first sip from the Folgers bottle, my top lip scraped against an edge of the bottle.  After a few more sips, I realized that the bottle was designed in a way that made it uncomfortable to drink out of it.  I asked a few other people to try drinking one, without suggesting why, and we all ended up agreeing that the bottle was poorly designed.

My wife contacted Folgers to report the problem, and they were very understanding.  They even sent some coupons for some free Jakada drinks.  Of course, since the packaging is the same, we never used the coupons because I didn't want to hurt my lip any more.

When hunting for the image above, I found this link that makes it sound like the Jakada bottle was a successful design. 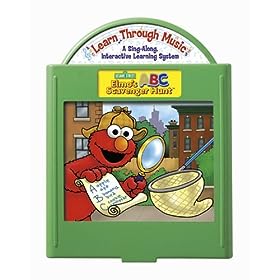 My dad got my son the Learn Through Music system a couple of years ago and it came with "Elmo's Scavenger Hunt" as one of the cartridges.  Each screen has its own theme and has objects that start with a few different letters.  Sesame Street characters sing a little song for each screen naming the letters on the screen and the objects that correspond to the letters.

The first time my older son was playing with this, he got to the screen with the letters T, U, V and W and a transportation theme, and I heard the following, sung by Telly I believe.

"T, U, V and Double-U, they're the letters that I found.  A truck, a unicycle, bad-ass wagon, to take me all a-round the town."

"T, U, V and Double-U, they're the letters that I found.  A truck, a unicycle, van and wagon, to take me all a-round the town."

I asked my wife, my dad, my mom and my aunt to all listen to it.  We all heard "bad-ass wagon."  And to this day (2 years later), every time I hear that screen's song, I sing it to myself as "bad-ass wagon."  I just hope that my sons hear "van and wagon." 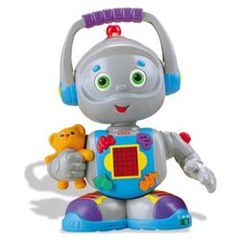 Yesterday, we were given another toy, Toby the Totbot, for my younger son’s first birthday.  Toby sings a few songs, one of which I had never heard before.  It's something about being in the park and seeing animals.

As I listened to this thing yesterday morning, I heard it sing something about seeing a puppy and then, "Mama said lick pussy," and then something about how the animal will leave soon.  The song continues through 4 more verses, each one emphasizing, either mama or daddy saying, "lick pussy!"

Last night when I got home, I asked my wife what she thought of the Totbot.  She said she thought it was saying something funny, about sex or something, but she couldn't remember what it was.  I asked her if maybe it was something about "pussy" and she said, "Ah, yeah, that's it!  It keeps saying 'lick pussy!'"  It had us both fooled.

Toys and other tangible products have a level of quality assurance they must go through that most software does not, sensory QA.  Not only do these toy manufacturers need to test for functionality, durability, and lead paint, they also need to test to make sure that the songs that are sung sound clear.  Food and drink packaging needs to test to make sure the item is pleasing to consume, not just with taste, but also with form factor.  Or at least, I would guess they do this kind of quality assurance, but with these products, it's questionable.